Reach out for a quote on a custom design or personalized gift!
Home | Lifestyle | Community Outreach | 12 Weeks of Giving | Teaming Up with the Salvation Army – Angel Tree Blessings
This post may contain affiliate links. Read my full disclosure and privacy policy here.

During Week 10 of the 12 Weeks of Giving we teamed up with the Salvation Army to help make Christmas brighter for two little girls.  T and I read several cards off the Angel Tree at our local mall and we selected two girls, age 14 and 9 to buy presents for. 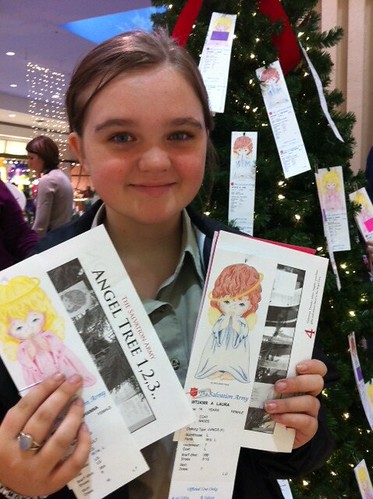 The 14 year old girl had a coat listed as her need so we shopped around and found a nice one at Old Navy.  They actually had them 60% off which was a great deal.  While at Old Navy I was able to get the 9 year old some pants and a nice shirt since that was listed as her need item.  We are giving the 9 year old a Disney Mix Stick since her wish item was for a MP3 Player and both of my girls have owned one and loved it.

A few other items we are donating are crayons, coloring book, stuff ‘n fluff animal with birth certificate and clothing, Twilight Saga themed items for the 14 year old and some novels that T recommends, a bracelet making kit, Bath & Body Works lotion set, etc.  My kids have been extremely excited about gathering items from several stores to package up and give. 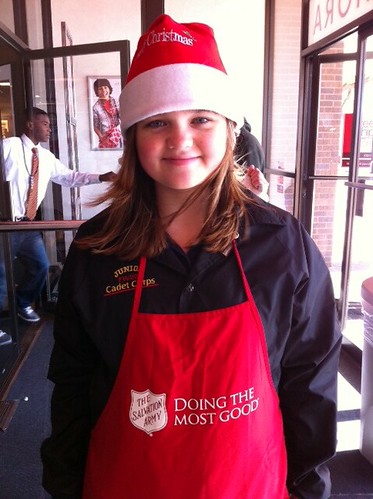 T also volunteered this week with her school at our local mall with The Salvation Army.  She was able to ring the bell to help raise funds as well as greet shoppers and open the door.  She was there for about four hours so I took Noah up to donate some money.  Of course he was so shy that his sister had to help him put the money in the bucket.  There were a lot of kids around.  Now him and Gabby like to donate every time we see a Bell Ringer no matter which store.  They love it.  They donated some change to one outside our local Hobby Lobby on Friday.

Did you give back to your local community this week? Remember, no random act of kindness is too small.  Even saying a prayer for someone is a blessing!

Feeling extra lucky for this wonderful family of m