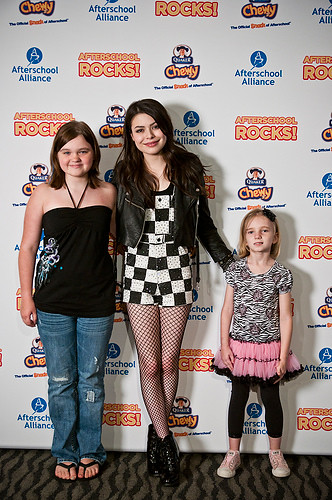 In May I was invited by Quaker Chewy to attend the Afterschool Rocks concert featuring Miranda Cosgrove from iCarly.  This was Miranda Cosgrove’s very first concert and my girls and I were thrilled to experience it.  On our way to the concert we jammed in the car listening to T’s iPod of Miranda Cosgrove songs since we were already fans.  During the concert we were surrounded by 200 screaming kids and watched Miranda perform 6 songs.

Being a teen mom myself I am very impressed with the Afterschool Alliance initiative.  A few facts to chew on:

Can you believe those facts?! I mean they all make sense but when they are written out like that it makes you think, doesn’t it?  I fall into those statistics.  I was a mother at the age of 15.  Yes, I had sex before I was married and had a child before I was even considered an adult.  I can say in our area there aren’t as many afterschool programs as I’d like to see.  Most of them are extremely costly and I for one know how important they truly are.

During our meet and greet with Miranda Cosgrove we were given the chance to sit at a table with her and ask a few questions. She was so sweet and answered our questions well. I must say I was impressed. Gabby and T were both completely star struck. Gabby wanted me to tell her she liked her boots because she was too nervous to say it herself. Then all of a sudden she worked up the nerve and blurted out ‘I LIKE YOUR BOOTS‘ really quick and loud right in the middle of me asking Miranda a question. We all just giggled. I knew T wanted to tell her how much she enjoys iCarly and how she loves her clothing style so at one point I looked at T and said ‘did you have something you’d like to say to Miranda?‘ and all T could do was stutter ‘I really liked your concert‘. She was so nervous that it was difficult to just get that one sentence out. She went from being red from embarrassment to pale white like she’d seen a ghost. I’ve honestly never seen my daughters speechless and yet I found it amusing. The whole drive home T was still trying to grasp the reality of it all. I thought she was going to faint she was so worked up.

My questions to Miranda Cosgrove:

How do you feel about working with a large brand like Quaker Chewy to promote the afterschool initiative?

I feel blessed to have the opportunity to support the Afterschool Rocks program.  When growing up I was very involved in after school programs such as music and sports.  Since I was lucky enough to have these opportunities growing up I didn’t know what it was like to not have them.  Now that I realize not everyone gets those chances I understand how important it is. ~Miranda

What do you think when you see little kids wearing your picture on their shirts or sporting various iCarly logo merchandise?  So in other words, how does it feel to have so many fans?

It’s still just all so amazing.  Each time feels just like the very first time.  I enjoy when my fans come up to me and tell me their favorite iCarly episode.  I really love it when someone comes up to me and says how much they like my style because I spend hours looking through catalogs with my stylists picking out clothes. ~Miranda

Miranda also complemented T’s blue highlights and Gabby’s pink tutu.  She was very well spoken, polite and down to earth.  She was patient with Gabby giving her several hugs and took her time posing for photos with us.  I love seeing famous people put their time and talent towards something good.

View all photos from our event on my Flickr set.

Full Disclosure: Quaker Chewy allowed us to be guests to Miranda Cosgrove’s concert in order to learn more about their Afterschool Rocks initiative.  Miranda Cosgrove’s quotes in response to our questions were not recorded or written down during time of interview and were written in this post based on my memory.  The words may not be exact as she said them but the concept is the same.