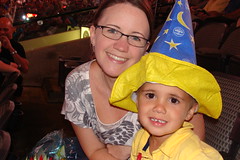 Last night we attended the Ringling Bros and Barnum & Bailey Circus locally at the American Airlines Center.  It was Noah’s first circus, last year he was sick and not able to make it with the girls and me.  We rode the train from Downtown Fort Worth to the American Airlines Center.  The kids love riding the train so it was a fun treat instead of driving.  The ride there was fun, watching out the window.  The ride home was a little different just because we were exhausted and it was dark so nothing to see.  However, riding the train home sure beats sitting in traffic. 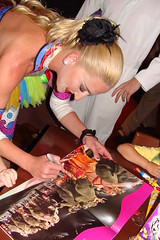 The night started with a Pre-Show Party which was fabulous.  It was a private invite that I consider myself lucky to have received.  The kids got to meet the circus characters including clowns and the Ringmaster.  We were given a program at the beginning that the children were able to get autographs on.  The clown noses and hats were just the icing on the cake and made the experience even more real for the kids.  Noah wore his hat all night long and loved it.  Him and Gab both took turns trying on their clown noses.  Also in our goodie bag were coloring books for the kids so that was our activity on the train ride home.  The Pre-Show Party had food and beverages too which I didn’t expect.  I was starving so the spinach dip and chicken strips were perfect for me!  The kids ate hot dogs.

We attend the circus almost every year and I must say hands down this was the best. 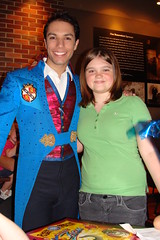 Throughout the whole show I think I said the word ‘wow‘ a million times.  Noah sat on the edge of his seat in awe by the magic.  At one point I think he was very confused when they made an elephant disappear and even a little concerned when they stuck flaming swords in a box that held a man.  He looked at me and gasped wondering if the man was burned.  I couldn’t help but giggle.  He was very impressed by the man and woman being shot out of the canon.  He has talked about that all day today.  There was one part where dogs were walking on their front legs and even doing back flips.  I could seriously go on and on about this circus, it was the best yet!

I encourage you to follow along with the upcoming events and local happenings here in DFW on the Ringling Bros Facebook Fan Page.  Last week they gave away the new Ringling Bros Circus Wii Game and you never know what’s next!

Did you know that every newborn in the U.S. is eligible to receive a free ticket to Ringling Bros. circus? What a wonderful way to celebrate the special arrival! The free admission offer is good for one ticket that is redeemable at any time during the lifetime of the child, whether at age 2 or 92.  To receive the child’s first free Ringling Bros ticket, parents need to only complete the registration form in the “Special Offers” section of Ringling.com or mail their name, address, newborn child’s name and date of birth to:

The parents will in turn receive a certificate exchangeable for one admission ticket for any Ringling Bros. and Barnum & Bailey performance in any city in any year.

During the circus I was tweeting, of course, all about our experience and even shared some photos.  A couple of other bloggers and myself used the hashtag #zingzangzoom if you want to go back and follow our conversation.  We had a great time!  We also tweeted along with Ringling Bros on Twitter.

The Ringling Bros and Barnum & Bailey Circus will be in DFW through August 15th.  If you plan to go, which I highly recommend, then use coupon code MOM on the purchase page under “Advance or Promotion Ticket Selection” on TicketMaster.com or mention the code if ordering by phone at 1-800-745-3000.

Have you attended the circus this year?  Do you plan to go? Tell me about your circus experience in the comments below.  Any funny stories or great times you want to share? View the rest of our family circus photos in our Flickr set.

Full Disclosure: My family was provided tickets to the Ringling Bros and Barnum & Bailey Circus as well as the invite to the Pre-Show Party in order to share the experience with my readers.  All opinions on the circus are 100% mine and I shared photos and thoughts based on my love for the circus.