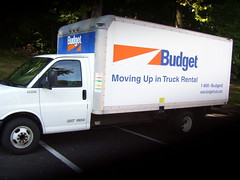 My life has been pretty crazy for the past couple of weeks.  I’m in the middle of a move.  A move that was unplanned, unexpected and in many ways unwanted.

The owners of my house that I’m currently living in are filing bankruptcy.  The whole situation they are undergoing is horrible for anyone, I couldn’t imagine.  The man was injured in the military and suffers from post traumatic stress.  I’m not real sure on the details but it has caused them to uproot their family across states to live with extended family members.  It’s an unfortunate situation which ultimately affects my family as well.  In their bankruptcy the mortgage company will take over the house I’m living in.  Of course I could probably fight it out for a while, seeing a bankruptcy lawyer takes time, possibly a few months especially since the mortgage company hasn’t stepped in quite yet.

However since the house was having some air conditioning issues when I renewed my last lease in June the owners lowered my rent $75 a month for six months to help off-set the cost of electric bill while they got the new unit put in.  In doing this they had me sign a six month lease instead of another full year so they could increase the rent back up to normal at that time.  At the end of May it seemed as no big deal to only sign a six month lease since both the landlord and I knew I was planning to stay until summer of 2011.  But now if I was even to try and fight the lease I could only buy myself enough time until it ends and the mortgage company won’t renew it which puts me moving at Christmas time.

For the past two months I have been searching for a new home and avoiding the move.  I had planned to move next summer into a larger home which would give Noah his own bedroom before starting kindergarten by upgrading from 3 bedrooms to 4.  But I wasn’t quite ready to take that step now.  Ready or not, here it comes… When doing my search I was determined not to move now and then again next summer, by choice anyways, so I finally found a house that we would be comfortable in.  I’m actually pretty excited about that fact.

One of the items on my life list is to own a house with a private study/office.  The master bedroom has a private office off of it.  It has it’s own door even though you can’t access it without going through the bedroom, which is fine with me.  I love it too!  The office has built in cabinets and shelves that are all wooden with glass cases and doors.  Very nice!  I won’t technically own the new house, though the option to purchase will be available in the future if I decide.

I’m trying to stay positive about the whole situation and just believe everything happens for a reason.  Just the simple fact that I found this perfect size home within the same school district and area is great news.  Hoping it’s a good sign.