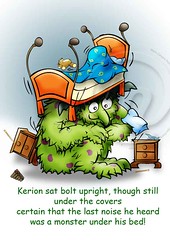 My kids have never asked me if there was a monster under their bed.  I’ve never had to check the closets at night and my girls always had to have all lights out to sleep; meaning no night lights.  Of course Noah is different, he at least wants a dim light on at all times.  I have been a single mother for years and lived alone with just my kids.  Noises have never bothered me in the past and to be honest I haven’t thought twice about not having a man around to keep me safe.

Our family dog, Nicki, is a playful Boxer puppy.  She has had the tendency to chew up my backyard and everything in it.  She even chewed the water hose right off the spout.  My master bath shares the outside wall with the backyard water spout so for the past few weeks I have heard this horrible noise that sounds like Nicki is chewing on the water faucet.  Usually when this happens I either knock on the window and holler at her to stop or yell for T to go outside and get onto her.  The noise has seemed so clear to me what it was that it wasn’t important that we never caught her in the act.  By the time T knocked on the door or went to open it, Nicki would be right there ready to come in.

Last week my father came over because we were scheduled to have below freezing temperatures here in Texas and he was kind enough to cover my outside faucets for me to protect them from busting.  Of course he gave me the good ole Father speech about how I needed to make sure Nicki didn’t tear the covers off or chew them up because the weather was going to get bad and I’d be in ‘a world of hurt’ if the pipes froze up.  So later that evening I hear that horrible noise from my bedroom where it sounds like Nicki is trying to rip the darn faucet off the wall and I immediately panic with dad’s words in my ear.  T ran outside, tripped the emergency lighting on the house so she could see Nicki and to her surprise Nicki wasn’t doing anything.  Now mind you, it takes time to run from one end of the house to out the back door so we still assumed she had just stopped.  Since it was still dark we put her in her crate for the night in the house and waited until morning.

The next morning Nicki goes out and after a few hours I hear that horrible noise again.  We head outside during daylight and realize the faucet covers are still intact.  Nicki had NOT been chewing on them.  Umm, freaky?  I’d say so.  So there you have it, I have a monster in the house.  We aren’t talking some mouse that is chewing on my walls.  Which that is high up on the creepy factor as it is.  But whatever this is, sounds like it is eating my pipes.  To make the sound like a Boxer was ripping the faucet off the wall and pulling the pipes out with it, can’t be a dang mouse.

So I’m not sure what to do about this.  Considering it sounds like it is literally inside the walls I’m thinking hanging floodlights around the house won’t help.  Heck over the Holidays I sold an item on Craig’s List and when the lady came to view it I was doing the dang pee pee dance in my drive way trying to keep my motion sensor light to stay on anyways.  So I can’t say the one I have is very functional.  I guess it might have reached a time where I’ll have to contact my landlord to help me find the monster.  Do you think she’ll mind I now have a Boxer?  Oops…