Reach out for a quote on a custom design or personalized gift!
Home | Lifestyle | Journal | In Memory of My Grandma
This post may contain affiliate links. Read my full disclosure and privacy policy here.

My grandmother passed away last week and her funeral was this Monday, February 18, 2013.  It was a very painful and long struggle for her towards the end and a very sad time for our family.  I spoke at her funeral and wanted to share my words here…

I had a dream that I was speaking here today, actually when I first woke I described it as a nightmare I assumed was caused from stress and worry for my grandmother. The dream was reoccurring until one night I decided to pray about it. I asked God if he was trying to tell me something. Again that night I had the same vivid dream where I could recite word for word what I said. I told God he must be mistaken, it was a crazy idea, that I just couldn’t do it. I knew there must be someone more qualified to speak on my grandmother’s behalf. After all my sisters both lived with her most their lives and therefore knew her better than I. That’s when I understood… God doesn’t make mistakes and I believe he was leading me to speak during a time when others may not find the words.

Grandmomma was your ideal grandmother. She always had sweets and treats at her house and gave her grand kids anything they desired. You know the kind of grandma that all grand kids love to visit and all parents worry their kids are being overly spoiled.

She dedicated her life to her family. Raising kids, then raising granddaughters, helping raise great-grandchildren and even was blessed with being a large part of her great-great-granddaughter’s life for the past several years. Nothing was more important to her than family.

Grandmomma always bragged on her grand-kids too. She would tell everyone how wonderful they were doing in school, or if they struggled in school then she bragged about their sports or extracurricular activities, and if they didn’t have anything going on at the time then she would just tell how sweet they were to her even if it was simply making her a drink or showing her they loved her. If they were struggling with life and their own existence in the world she would remind them how proud she was, how strong they were and how nothing in this world was more precious than life and family.

She would tell bedtime stories every night until you fell asleep. She never turned down a child or said only one story was enough. I remember the stories were so detailed and she was so animated in telling them that for a long time I believed they were real. It was years later that I realized the stories came from a storybook that she merely memorized.

All of the grand-kids would take turns climbing in her lap on the couch. And we would all drink her coke out of her cup. It didn’t matter if she just made us our very own, we would still drink hers. She would joke that apparently her coke tastes better and she was right. It did.

I remember all the times I would visit her at her antique shop. One day a gentleman brought in a broken antique vase. It was in pieces on one side. I watched her put the pieces back together, putty and hand paint every detail until that vase looked exactly the same on both sides. I was mesmerized.  She was an artist and she always encouraged creativity. My sister, Cleo, took after our grandmother and our father with the artistic skills. Grandmomma set up a room in her antique shop just for Cleo to make and sale her crafts. She was always supportive and inspired you to follow your dreams.

One day while I was at her shop I spent the whole day begging her to give me one of the rings from her jewelry case. It was a beautiful ring but she wasn’t giving in. To be funny I took one of her business cards and wrote a message on the back of it saying ‘Do not buy this ring, it’s cursed’ and propped the card up in front of the ring in the case. I honestly expected her to find it that night when closing up but instead a few days later a customer came to her very intrigued wanting to know the story of the cursed ring. When the woman lead my confused grandmother over to the jewelry case Grandmomma just laughed and said ‘that ring is not for sale’. A few years later when I became old enough to own a diamond and sapphire ring, she wrapped up the note I wrote along with the ring box and gave it to me at Christmas.

If you were to show up at my house in the middle of the night to visit or for a late night snack, if I thought you were truly hungry I may let you in and point towards the kitchen otherwise I’d tell you that you were crazy and to come back in the morning. Not our grandmother. She would get up and head down to the kitchen and fix an egg sandwich and listen to whatever you had to say. She never turned anyone away and that goes for non-family members too. No matter how large our family grew she always made room for more.

When my daughter Gabby was in the hospital about to face her second major brain surgery Grandmomma came up to visit the night before. When she was walking out to leave I followed her out into the hall to hug her good bye and thank her for coming. During that embrace I laid my head on her shoulder and just cried. She hugged me and said ‘I know’. And she did. I didn’t have to say a word. I didn’t have to pretend to be strong in that moment. She just understood. 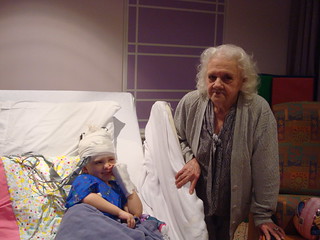 A few weeks ago my parents started going through some old home movies to transfer to DVD. We wanted to digitize some of the old memories so we could watch them. I was playing one of the videos for Grandmomma in the hospital last week of our family visiting her parents, my great-grandparents, in Ranger where they lived. Grandmomma’s nephew, Stephen, was mowing the lawn and she told him he wasn’t doing it fast enough so she took over. Obviously she couldn’t make the riding lawn mower go any faster than he could but you could tell from her posture and smile on her face that she was having fun riding it around the yard. The best part of it all was the fact she was all dressed up mowing the lawn. She had on dress clothes, her hair curled and makeup done. I’m not even sure if my grandmother owned what we would consider lawn mowing clothes. It didn’t matter where she was going or what she was doing she fixed herself up to look her best because after all someone may see her.

She was a beautiful woman and I hope that’s how each of you remember her. As a loving, caring, confident, passionate and beautiful lady.

Speaking at my grandmother’s funeral gave me a little bit of peace.  I think I’m still a little numb to her truly being gone.  She was my last living grandparent.  I know she is in a better place now and I continue to pray for my parents nightly.